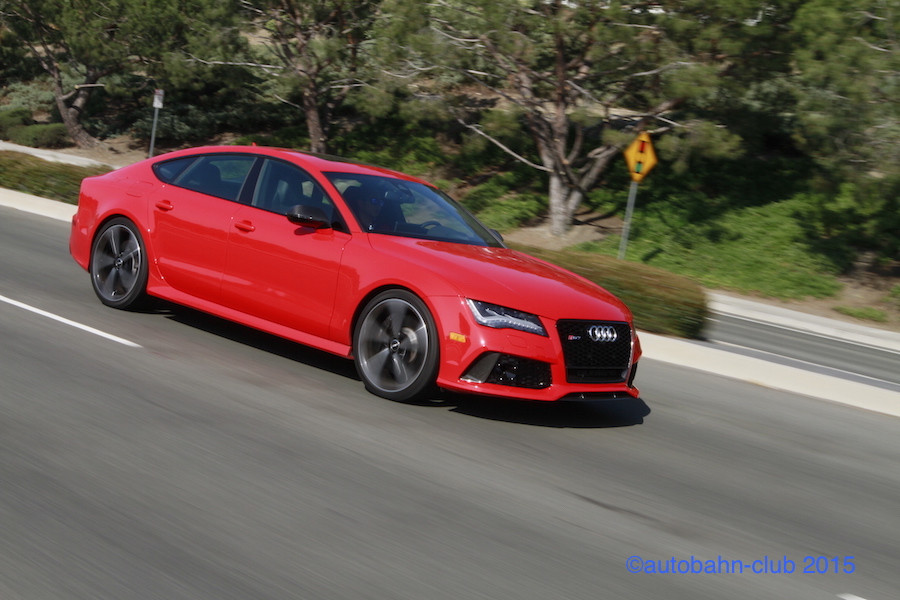 560HP/700 NM (516 lb/ft) of torque. Thats plenty of power to have fun with. Even though the car weighs over 2000 kg (4475 lbs), it has absolutely no problem to catapult you from 0 to 60 in 3.4 seconds or 0 to 100 km/h in 3.9 seconds. This is partly possible because of the fantastic Quattro AWD System and the incredible ZF 8-Speed Automatic, which must be the best automatic on the market at the moment. 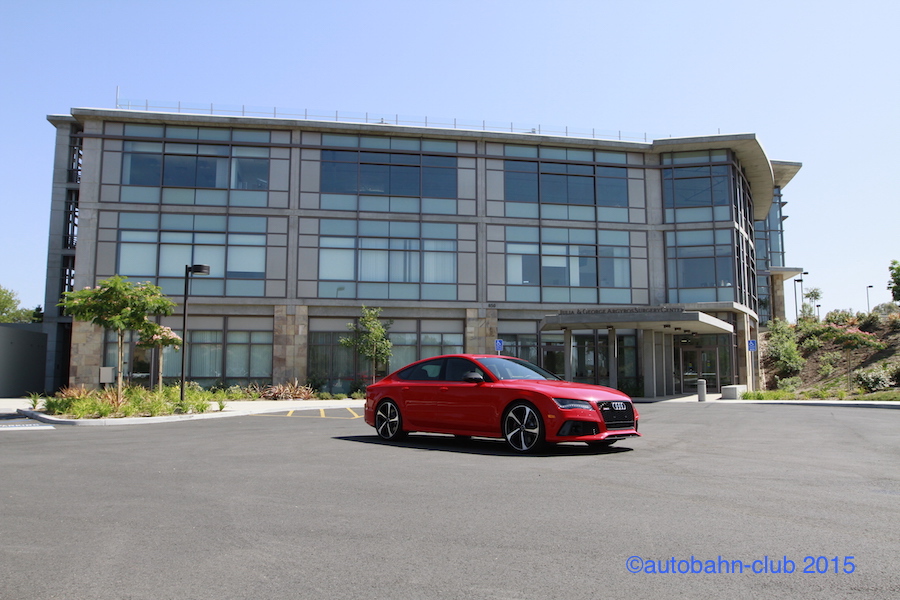 Sound sound sound sound. This is my main memory of the RS7. The unbelievable sound that comes out of the exhaust pipes and even more so the sound that comes through into the cabin. I couldn’t describe it any better than saying it sounds like hellfire. Now, I don’t know how hellfire sounds, nor if it has any sound at all, but every time I stepped on that pedal, it felt like hell is breaking lose. While BMW has gone to synthetic sound design to compensate for the loss of sound due to turbo charging, Audi just made it work. It sounds absolutely phenomenal, and most importantly, it sounds 100% real. 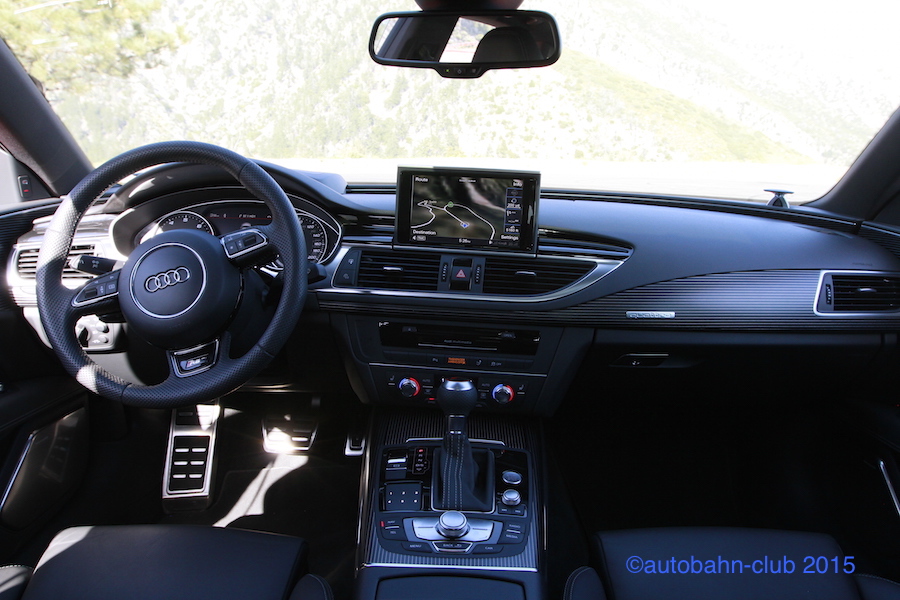 The Cabin of the RS7 is very luxurious and made of some of the best materials you can hope to find in a car. When you get in, you immediately feel that you’re driving something special. It does definitely feel more expensive than a regular A7 even though the cabin is almost identical. It might be because of the RS Sport seats in black Valcona leather with contrast honeycomb stitching, that are unique to the RS models in most markets. Our car didn’t have the Carbon Fiber trim but instead the very nice and more elegant looking layered aluminium black wood inlays. I would probably still go for Carbon Fiber myself for that sportier look. The test car also was equipped with the $4.900 Bang and Olufsen sound system, which not only has the cool tweeters that drive out of the dashboard, but also sounds extremely good. Everything else is pretty much like the normal Audi A7, so I won’t go into any further details. 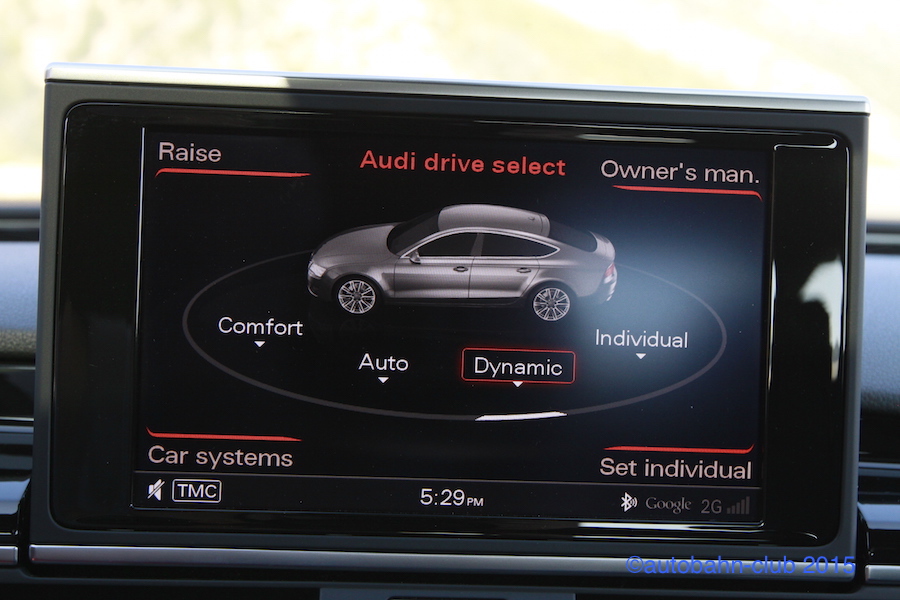 The main problem I had with the car is that there isn’t that one designated SPORT or EXHAUST button that will clearly indicate when I am in the sportiest mode with the exhaust valves open. Even you put the car into the “Dynamic” mode already in the MMI, you have to put the gear selector into D, then snap it back once more to set it to S Automatic mode in order to put the car into its full sport mode with the exhaust valves open. In order to get those backfires and the burbling exhaust noise that’s so enjoyable in this car, you have to switch on the S mode. This is quite annoying and something that I believe Audi changed already in the upcoming R8, since I have seen an exhaust button on the R8′s new steering wheel. The first couple of days I wasn’t even aware of that ‘secret’ Sport mode since I always immediately switched the transmission into the manual mode once I got in, which won’t fully open the valves. 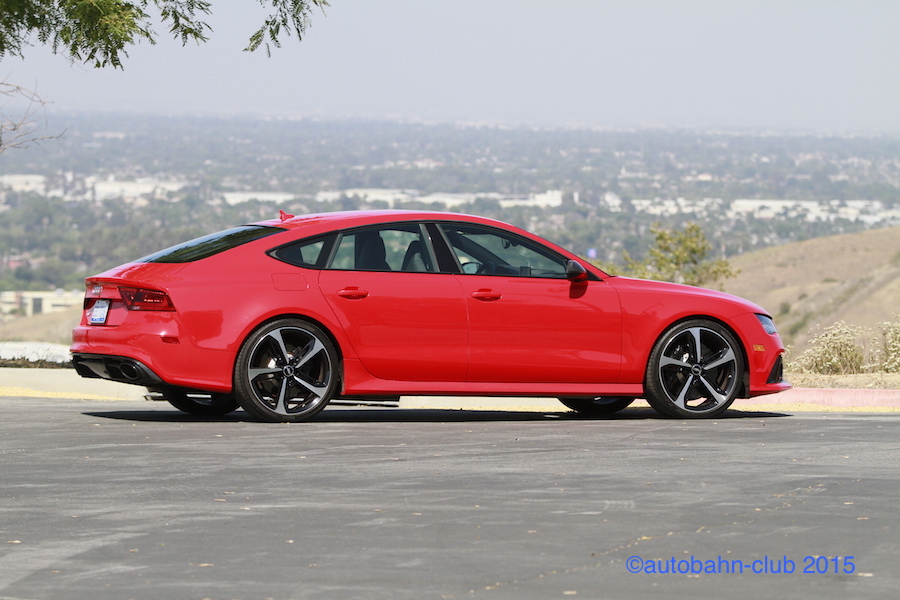 Another drawback of the RS7 is its gas consumption. I averaged 9 mpg (26.1 l/100 km) over the 800 miles I drove in this car. The problem is the addicting acceleration and sound the car can deliver if requested by the driver. It forces car addicts like us to push the engine to its limit quite a lot. I think you could drive the car with 14-18 mpg average – but then it’s only half the fun. 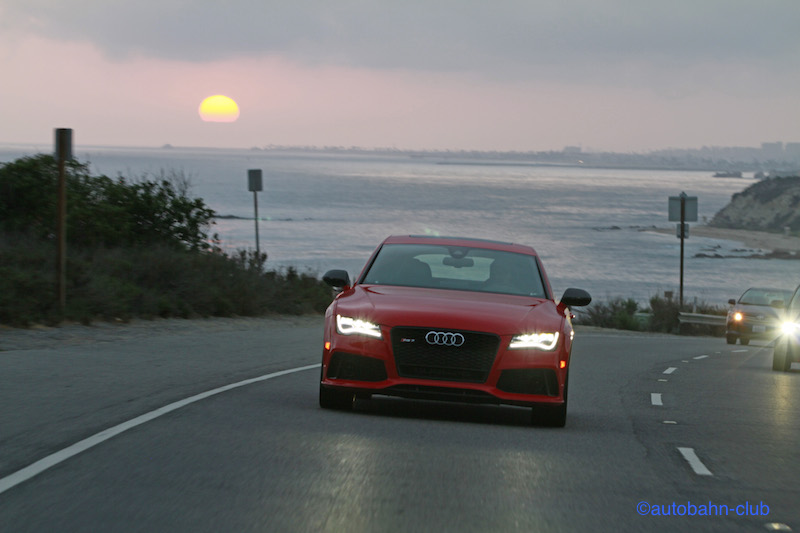 Overall this car blew me away. I have to admit I am a big ///M fan and really like the M6 Grand Coupé a lot, because of its design, performance and the fun you can have with it. However, the Audi RS7′s performance, thanks to its Quattro, is just insane. The way this thing pulls out of corners or from a dead stop is just impossible for a RWD car. The drawback is that you can’t have as much fun in a Quattro in terms of drifting and such, but I believe there is a limited amount of customers who actually drift their cars around town. For me I would have a very tough time deciding between the RS7 and the M6. Both have their advantages and drawbacks. Compared to the CLS 63 AMG however, which also is a beautiful looking car, the RS7 is the clear winner to me. The CLS 63 AMG is just not as sporty, mostly because of its terrible transmission, which lacks in responsiveness. Audi did a great job here and I am a huge fan of the ZF 8-Speed-Automatic they put in this car. It shifts super quick and responds just like a good DCT. What a great car!

Text and Video by Kai Groschupf

Special Thanks to Farbod Tehrani and Francis Galang

We use cookies to ensure that we give you the best experience on our website. If you continue to use this site we will assume that you are happy with it.Ok